Today’s post starts with a bit of a throw back to the popular series of public-facing “Press Play” workshops we offered in the AMP Lab in 2018-19. Co-facilitated by me and SpokenWeb RAs Caitlin Voth and Deserae Gogel, the workshops were designed to introduce students, faculty, and members of the public to the SpokenWeb research axes, as well as the history and affordances of magnetic tape media through creative-critical remediation and DIY methods. At Caitlin’s prompting, I had purchased a button maker that became part of the AMP Lab’s DIY equipment and the star of the workshop we called “Tender Buttons” (after Gertrude Stein’s wonderful book of the same name) and another workshop called “Media Buttons.”

Political buttons have a rich history dating back to the 18th century in the United States and have long been associated with social justice and feminist activism. One of my favourite collections and resources on buttons and social justice is “Pushing Buttons,” an online exhibition of the Jean Augustine Political Button Collection at York University (Toronto, Canada) offering a glimpse into politics and activism in Canada. 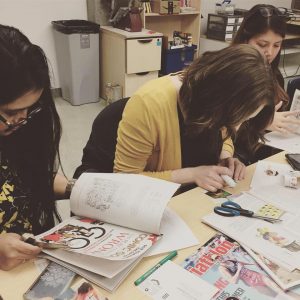 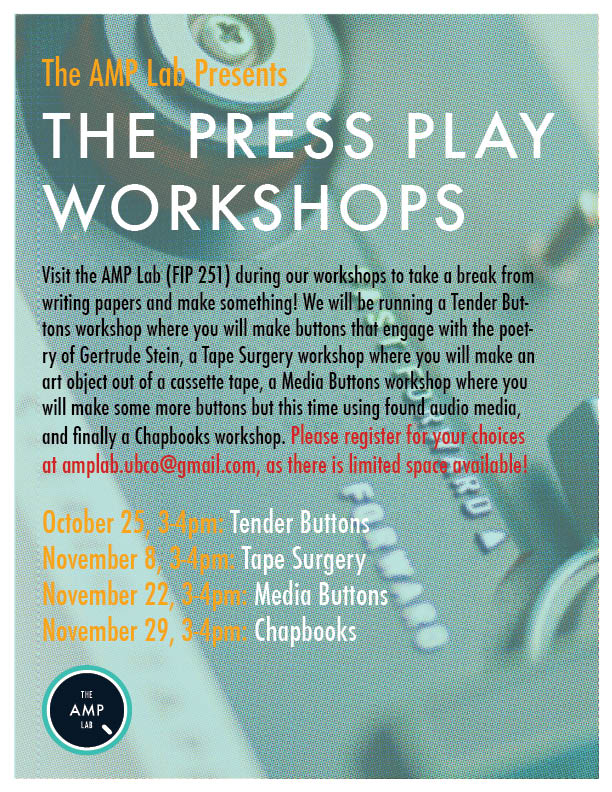 Our “Tender Buttons” workshop introduced participants to the poetry of queer feminist poet Gertrude Stein; after discussing of one of her poems, participants created buttons using collaged selections from her poem and other found media, sometimes creating ironic commentary on contemporary media images. “Media Buttons” introduced participants to old media and ad copy from the Radio Shack catalogues archive from the 1940s through 1970s. After identifying old audio media and analysing the ad copy, participants created ironic or critical commentary through collage. Each participant gifted one of their buttons to another person in the workshop, building community through gift exchange, much as poets of the 1960s and 70s did through their creation and exchange of copies of audio tapes. 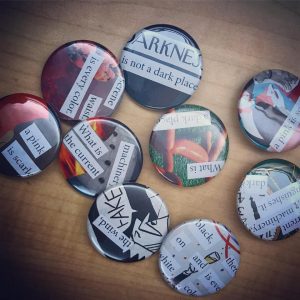 In the end, the button maker proved to be one of our most popular pieces of DIY equipment and is often sought by other research teams in the AMP Lab. It’s not the most intuitive piece of equipment to use though and so as part of our ongoing focus on student training, our team has created a Button Maker badge. Level 1 is entirely online and student RAs can complete it from home, which is especially convenient in these pandemic times. However, like most of our badges, the Button Maker is a combination of online and in-person learning: Level 2 requires students to come into the lab and demonstrate facility with the equipment. In this, we extend to the AMP Lab the findings from a recent study by UBCO alumna Katerina Anderson, et al, that found skill acquisition in Digital Humanities could not rely on online training alone: “models of online training lack the “in-person interactions” that are an integral component for the success of DH projects, and by extension, the acquisition of the training required to utilize the tools to participate in such projects.” Anderson et al are here referring to Digital Humanities tools but I would argue the same applies equally or more so to a space like the AMP Lab that includes DIY maker space equipment, where in-person, hands-on practice is essential. 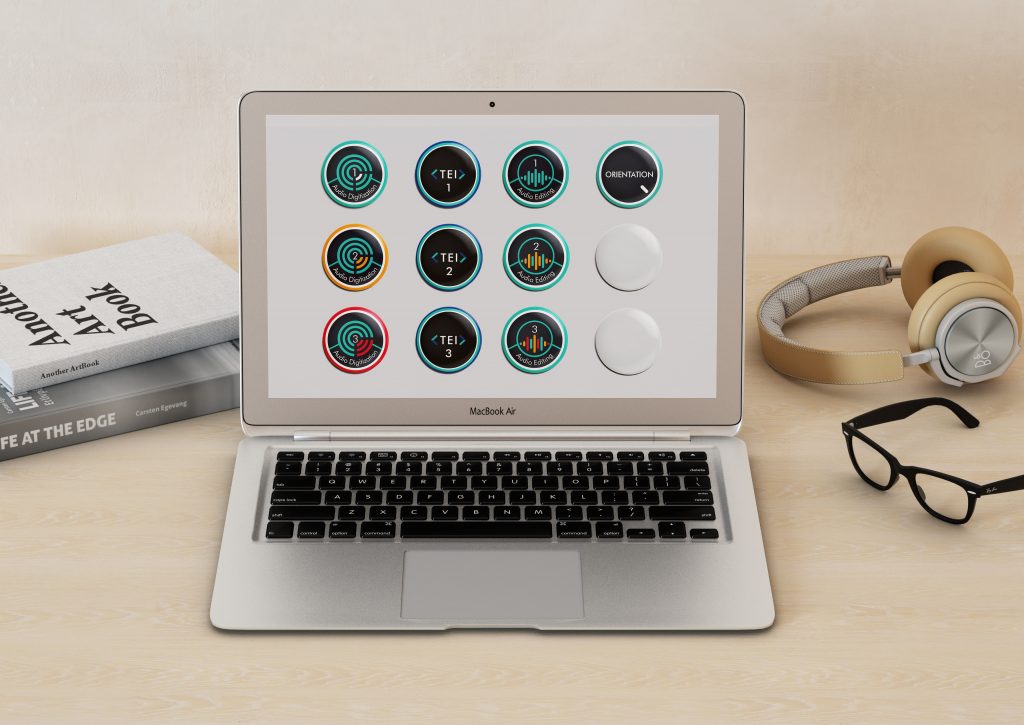 Back when it was still possible, we created a fun video where AMP Lab manager Yasaman Lotfizadeh explains and demonstrates how to make a button from start to finish. 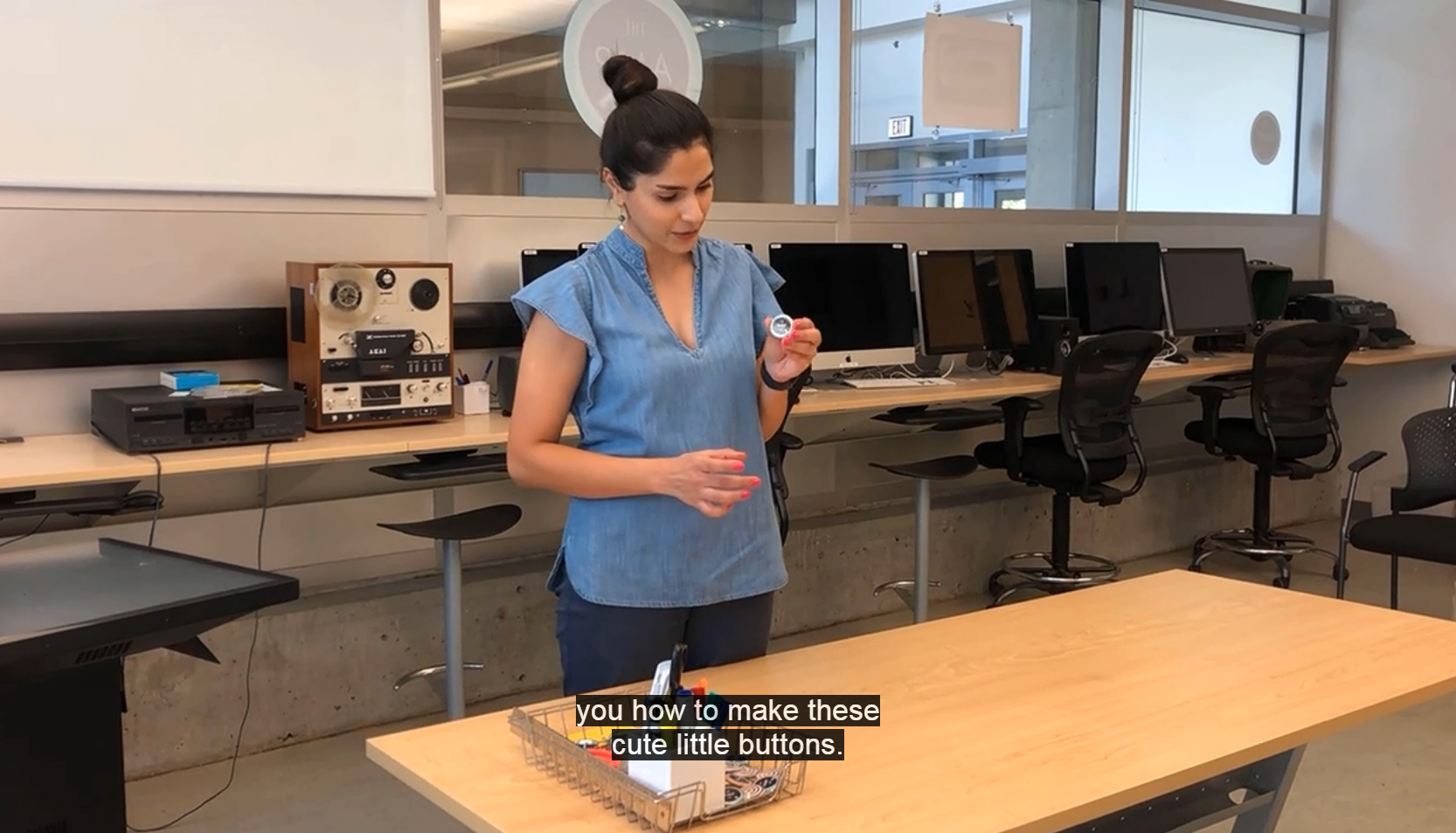 AMP Lab PRC fellow Ahlam Bavi, UBCO Librarian Marjorie Mitchell, and I then developed the badge itself which lives in UBC’s Canvas platform, with a badge awarded through Badgr where you can view all our badges. 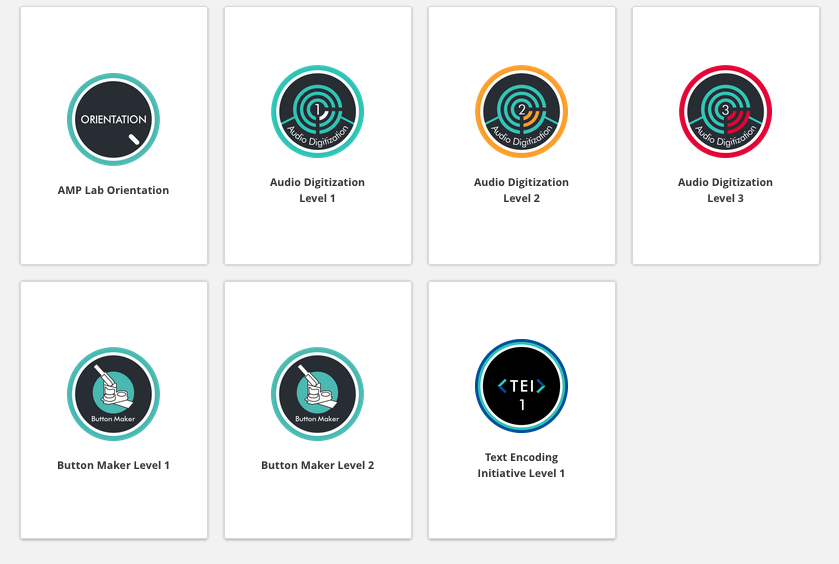 To complete the Button Maker mini module, our student RAs simply need to watch the video and answer a series of quiz questions about the specifics of the equipment. They’ll then come in and complete a demo of the equipment and make a badge, after which they’re clear to use the button maker for any research projects. The public can find our button-making video on the AMP Lab YouTube channel here.

All of our modules provide training that complements the research central to the AMP Lab and in the upcoming months we’ll be releasing new modules and badges including podcasting and chapbook-making, which are key ways the SpokenWeb team is remediating digitized literary audio. Stay tuned!

NB: The Press Play workshop series emerged from the original workshop of that title that Deanna Fong and I facilitated at the Digital Editions / Digital Archives symposium at UBCO in the summer of 2018.