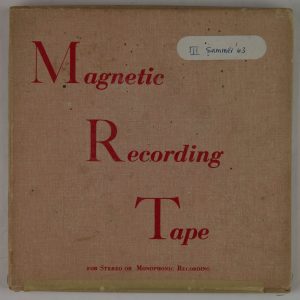 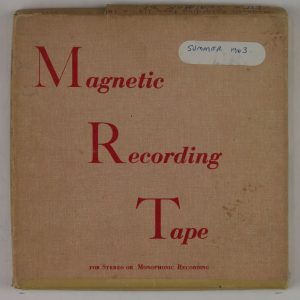 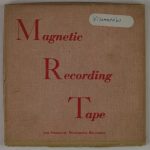 Recently I’ve been thinking back to when I first received the box of Warren Tallman’s reel-to-reel and cassette tapes from my colleague Jodey Castricano in 2012. I remember looking through the dozens of tapes and being excited to spot the 1963 Vancouver Poetry Conference reels among them. These were recordings of lectures and readings by Robert Duncan, Margaret Avison, Robert Creeley, Allen Ginsberg, Denise Levertov, Charles Olson, and Phillip Whalen during a UBC summer course co-organized by Warren and Ellen Tallman and Robert Creeley. I momentarily (and somewhat hopefully) thought: “maybe these are the original tapes!” I say “momentarily” because the literary historian in me already knew the original tapes made by Fred Wah had been digitized and made available on the Slought Foundation website. In 2002, Wah writes: “With the help of Slought Foundation, I am archiving some parts of my tape collection. Though the primary reason for this is to preserve rather old reel-to-reel taped events, I would also like to make this material available to educators, researchers, and poets.” In fact, I was already using those digitized recordings in a class I was teaching at UBCO on the poetics research site. I say “hopefully” because as a literary scholar I had absorbed the university’s valuing of the discovery of unique, original archival materials over copies. In the few minutes it took me to realize what I was holding were copies, I remember feeling my elation turn to disappointment.

Since that initial unboxing, however, I’ve come to an entirely different perspective, one that I’ve touched on briefly in my chapter on “Nostalgia, Old Media, and the Vancouver Poetry Conference 1963” in CanLit Across Media: Unarchiving the Literary Event. Now I see that it is the copies and their circulation that tell a far more interesting story about the way poetic listening community was built through the acts of reproduction and circulation — or copying and sharing. Wah tells us: “I recorded 4-track, 3 3/4 ips, on a Wollensak, using one microphone. I made copies of the tapes twice, once for SUNY-Buffalo and once for Simon Fraser University.” Yet we know that many more copies were made. Robert Hogg writes that he “borrowed Fred Wah’s originals when we were both in Buffalo and copied them then” (Facebook message, January 10, 2021). Those copies are now in the SoundBox collection here at UBCO. We also know that the U.S. American critic Michael Davidson listened to copies of the tapes in the late sixties (Ghostlier Demarcations), that poet Robert Duncan almost certainly had copies, which he then copied for Denise Levertov (Davey “Tape-Recorded Poetry”), and that Frank Davey had copies he worked from to write his 1968 doctoral dissertation.

The copying and circulation of tapes did more than build a community of poet-listeners, however. Davey observes:

“… a lot of early scholarship on, say, the Black Mountain poets was on the basis of the tape recordings that were circulating. I couldn’t have written my Ph.D thesis in ‘68 on Duncan, Olson, and Creeley without this enormous tape archive. It was interesting that my supervisors at Southern California, they had no problem with this. We just had to document it. And a lot of it says “tape in my private possession” in the bibliography, because where else was it? No university library held these tapes. Only the private archives of myself or Fred or Warren.”(Roundtable on Poetry’s Tape Recordings, TEMiC 2013)

Today I find myself excited about the network of copies SpokenWeb’s SWALLOW audio metadata ingest system will allow us to trace (at least within university collections) and what it will allow us to say about community-building that took place in the 1960s and 70s through the copying and sharing of audio artefacts, and what was at stake in those activities. Perhaps other copies held in private collections will also emerge and enter the network, particularly if they’re not viewed as “mere copies.”