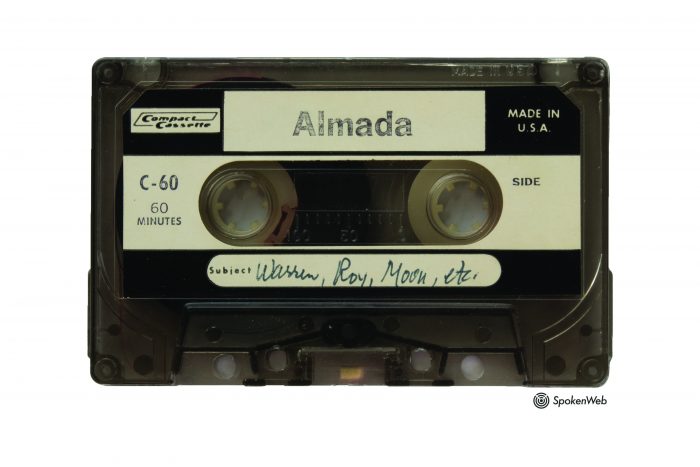 On July 20th, 1969, around 3:30PM EDT, Angela Bowering, George Bowering, Roy Kiyooka, and Warren Tallman gathered around the TV in the Bowerings’ Montreal home on Grosvenor Avenue to watch the Apollo 11 moon landing. Recorded by George Bowering on cassette, the tape features the overlapping sounds of the group’s conversation and the televised event. We know that George Bowering often recorded informal conversations with friends; this tape, however, is unique in that it captures how a group of poets and scholars witnessed an historic event in real time, and is a fascinating example of how occasions, sociality, poetics, and media converged at a particular historical moment.

This recording posed many unique challenges for transcription. Between the volume of the television, piercing “beeps” (quindar tones which signaled communication between the capsule communicator and spacecraft crew), and the conversation among Kiyooka, Tallman, and Angela and George Bowering, each of whom were situated in varying proximity to the microphone, the sound quality was poor and uneven. These two distinct and competing threads of audio raised questions about which voices and sounds should be prioritized in the transcript. From our close-listening, we ultimately decided both the conversation and television were equally important, and that capturing the dynamics, overlaps, and dialogues between the two were central in producing a contextualized and legible transcription. To differentiate between the two sources of sound, the television broadcast is transcribed in italics.

The multi-mediated broadcast was also difficult to capture. Communications between the astronauts of the lunar module “Eagle” (Edwin “Buzz” Aldrin and Neil Armstrong), the command module “Columbia” (Michael Collins), and “CapCom” at NASA’s mission control relied on a signal transmitting over 322,000 km. This transmitted audio and video from space was then converted and broadcast live on news networks around the world. This major media event is estimated to have drawn around 650 million viewers worldwide. On Bowering’s tape, we can hear a news anchor (probably, though we have yet to confirm, Walter Cronkite of CBS) witnessing and responding to this footage. Using the transcriptions from the Apollo 11 Flight Journals, we can locate the Apollo 11’s mission time as heard on the Bowering tape from approximately 078:30:08 to 078:53:10, at which point the Eagle was in lunar orbit, prior to its powered descent. Curiously, just after 4:00PM, George Bowering changes the channel to watch the Dodgers and Giants baseball game, possibly missing the Eagle’s landing at 4:17PM EDT.

Notes:
1. This tape (2019.003.002B) is held in the SoundBox Collection in the AMP Lab at UBCO as part of the George Bowering fonds.
2. Excerpts from the CBS moon landing and moon walk broadcasts are available on YouTube, but do not include the section heard on the Bowering tape.
3. It is not entirely clear if Bowering switched the channel back, as the tape ends shortly after this.

Megan Butchart holds a BA (Hons English) from UBCO and is presently an MA student in the Department of English and Film Studies at the University of Alberta.