The Press Play Project is a cooperative effort between the University of British Columbia (Okanagan), the University of Exeter, and Concordia University. “Press Play!” is an innovative pilot internship exchange program that positions experiential learning at the heart of its mandate. “Press Play!” gives students agency to pitch and pursue a self-directed research-creation project in one of the following faculty-mentored streams of their choice:

The Digital Humanities Lab at the University of Exeter is a state of the art facility offering unique spaces, equipment, and training for staff and students. Followings are the Press Play Project houses by the DH Lab:

Cotton Famine poetry is verse relating to the Lancashire Cotton Famine of 1861-65. This period of economic distress was largely caused by the American Civil War and the Union’s blockade of the exportation of Confederate cotton. These poems, largely taken from newspapers, discuss people’s attitudes to the issues thrown up by the war and the financial hardship they were suffering. Hundreds were published in Lancashire between 1861 and 1865 but many more have been found as far afield as Australia, France, Ireland, and America.
• Cotton Famine Poetry database
• (De)Familiarising Cotton Famine Poetry: Mark-up and Encryption
• Cryptic clues and historical clues 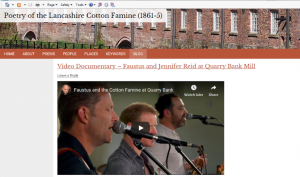 Famines in India and Britain:

The recently completed project “Famine and Dearth in India and Britain, 1550-1800” created a searchable web-database containing c.750 texts in 10 languages, enabling exploration of the cultural histories of famine and dearth in early modern India and Britain. These texts cover a wide range of genres, including chronicle histories, gazetteers, official correspondence, legislation, pamphlets, periodicals, plays, poetry, surveys, and fiction and non-fiction. Using material from this publicly accessible database and the British Library’s collections, the follow on the project “Famine Tales from India and Britain” enables the modern re-appropriation and narration of selected episodes of early modern famine and dearth, to engage new audiences and participants from rural and urban creative industries, as well as academic communities in India and Britain. The famine tales are being painted and narrated by traditional scroll painters and singers of Naya village in West Bengal, and by new wave, urban graphic artists in Calcutta: both groups are recognised for their vivid socio-political commentaries. 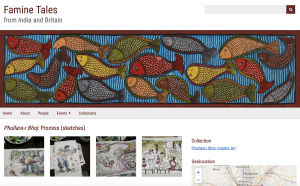 The AMP Lab houses projects that engage in the work of the humanities–adding value to cultural artifacts through interpretation and analysis–-in a digital context. The Press Play projects housed by the AMP Lab include:

Drawing upon a wide range of disciplinary perspectives – including literary studies, media, and sound studies, digital humanities, library, and archival science, computational analysis and design, oral history, pedagogy, and event curation, among others – the SSHRC-funded SpokenWeb partnership pursues the collaborative formulation of answers to core questions surrounding the preservation, digital presentation and critical and creative use of humanities-oriented spoken audio materials, and temporal media holdings of cultural significance, in general. The audio archive at UBCO is called the SoundBox Collection. For more information, see: spokenweb.ca
• Digital preservation of literary audio
• Critical and creative use of humanities-oriented spoken audio materials
• Production of podcasts using digitized literary audio 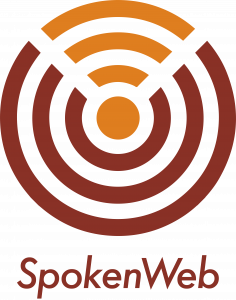 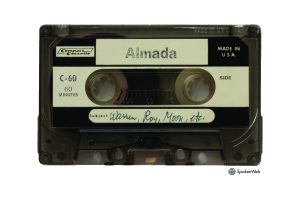 d a r c (digital art history research collective) is an interdisciplinary group at the AMP lab led by Dr. Hussein Keshani who teaches in the Art History & Visual Culture program. His research specializes in the arts and visual cultures of Sultanate and late-Mughal-era South Asia and Digital Art History. Members include graduate students from the Digital Arts & Humanities theme Interdisciplinary Graduate program. In the past, student researchers have come from education, engineering, history, and art history. d a r c explores imaginative ways of using digital media to study and tell stories about the world’s natural and cultural heritage. We work with technologies like 3D modeling, 3D printing, web development, and locative media to expand our idea of what the humanities can be.
• Art History
• Visual cultures
• World’s natural and cultural heritage 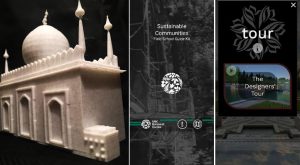