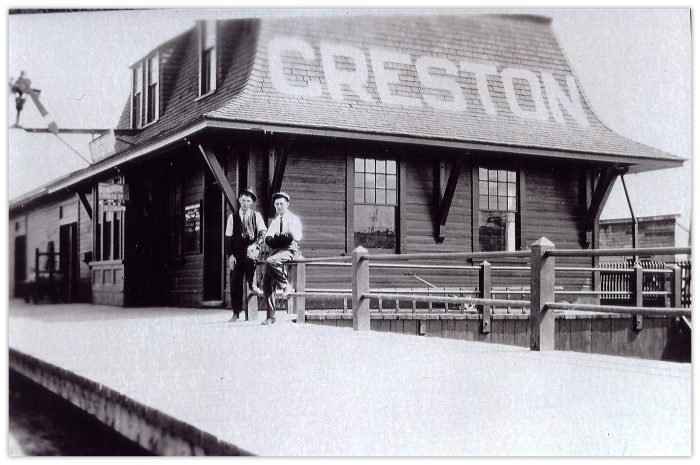 In the following exchange, UBC (Okanagan) SpokenWeb affiliates Karis Shearer and Paige Hohmann turn their attention to a clip from the SoundBox Collection and consider its connection to the BC Interior and the BC Regional Digitized History archive. This is part one of an ongoing series called “Archival Bonds” where researcher and archivist think together about the ways digitized collections can speak to each other.

Karis Shearer: I have always thought about the SoundBox Collection as representing Vancouver literary communities of the 1960s to 80s. However, as we process the collection as part of the SSHRC-funded SpokenWeb project, I’ve been surprised to see how many connections there are to the BC Interior. For example, in 1969, Frank Davey recorded interviews with writer and UBC English professor Earle Birney (one of the founders of UBC’s Creative Writing Department), for Davey’s 1971 book titled Earle Birney. In this short clip Birney tells Davey about “an elaborate trip” through the BC Southern Interior and the precarity of his employment after finishing high school.  It is also a literary trip insofar as it provides Birney the occasion to write his very first poems. His time in Vernon, in contrast, is decidedly uninspiring; while he attends social events and regular Sunday sermons at the Presbyterian church (Cameron 31-34), the struggle to make ends meet is very real.

Much of the infrastructure to which Birney refers either no longer exists or looks very different today and so turning to the British Columbia Regional Digitized History repository can enhance our understanding of the geography and transportation technologies that figure so prominently in this interview clip. Paige, how might we understand the relationship between BCRDH and the SoundBox Collection?

Paige Hohmann: To understand the interrelation between BCRDH and the Soundbox Collection, we have to start at the beginning. It’s rare that a single artifact reveals much by itself. An old photograph, letter, or sound recording taken alone is a pleasant decoration. A group of these same records, contextualized in certain ways, can be called an archive.

Departing from a tradition of administrative record keeping, archival theory supposes that evidence of activity is necessarily fragmented across many documents. When we reassemble the fragments, we can reconstruct an action, and gain a view into it. The relationships that allow the reconstruction is what Dr. Luciana Duranti has called the “archival bond” (1997).
While the functional details of this bond don’t always translate perfectly to non-business records, the notion of adjacent documentary traces shedding light on one another still seems to hold. These contexts and relationships and bonds abide, but digitization and its orderly continuation into online spaces lets us see – and hear – archives speak to one another.

Earle Birney: …But at any rate, I worked that summer [1920], and then the local Imperial Bank in Creston, the manager asked me if I’d like a job as a junior clerk. It was damn little money, but winter was coming on. There was no farm work in the winter. And I thought, “oh, I’ll take it to see what the hell it’s like.” He made [inaudible], and you know, reckless advancement. And what I got was fifteen dollars a week. [EB chuckles.] That’s what I started with, was fifteen dollars worth. I thought, “Jesus, that’s damn little!” After all, a suit of clothes would cost fifty dollars or something, and so on. Fifteen a week. And you had to have a suit of clothes and you had to have a… I couldn’t afford a regular white shirt because I couldn’t wash it myself.

[00:53:31] Earle Birney: And so I wore a celluloid collar. I must be the last Canadian that wears celluloid collars! [EB laughs.] And I worked in this bank for about two months and then they suddenly moved me. They transported me to Vernon [in 1921] and this was kind of exciting in a way. Up to this time, you know I took the bank job… Well, I was going back home weekends.

[00:54:10] Earle Birney: Yeah. But now I got transported to Vernon and the way that transport was in those days [1921], it was a long way. You had to get on the train in Creston and go to Kootenay Lake forty miles down, and then take the paddle wheel steamer and down the lake to Nelson, and then a train to Penticton, and then another paddle wheel steamer up the lake to Okanagan Landing–bit like that. And then the train up to Vernon! It really was an elaborate trip and it took me nearly four days because we missed the boat at Penticton. The boat didn’t wait and the train was late coming–a couple hours late.

And I had to spend the weekend in Penticton. It was a great adventure for me. And as a matter of fact, the first poems I ever remember writing I wrote on that train going by seeing the Kootenay falls and what’s it called, [Blind?] Falls. [Blind Falls?] was long before they put a dam in. Beautiful falls. And the lake was marvelous. So [I] got up to Vernon and worked there, still for fifteen dollars a week! [EB chuckles.] I’d got a move but no promotion. [FD chuckles.] And there it began to be tough because I could not get board and room for under fifty-five.

[00:55:58] Earle Birney: A month. And I was getting fifteen a week, so I was only five bucks over for everything else–for clothes and so on. And so what I did was I managed to get board for forty-five without a room, and there was an empty room over the bank they let me have just to scrounge some blankets. And I saved that ten bucks by sleeping on the floor in there. And there was a wash basin place and a lavatory in the back of [the] bank. And I used that and that was how I solved the sleeping problem. And [I] ate around this boarding house. But it was still no good because I was getting old enough and I wanted to go to dances and you couldn’t afford to take a girl out to dance, you know? I wanted to dress better and all that. And so what little I saved from the cucumber picking I used up just trying to stay alive and properly clothed in Vernon! And after I’d used the money up I thought, “jeez, I better get out of here while I still can!” I had just enough left to get back home. And so I quit the bank. I wasn’t particularly good at it anyway, and there was no reason for promoting me. And I got back home and found my parents had sold the place and were going to go back to Banff. And so I decided that I would go back to the Rockies too because I was getting in a kind of sense kind of homesick, I guess. There were the other kids I went to school with there and stuff. And I thought maybe I could pick up a job there. So I went back to Banff and I did pick up a job on survey party. And we left Banff and went down to Waterton Lakes. You know that part?