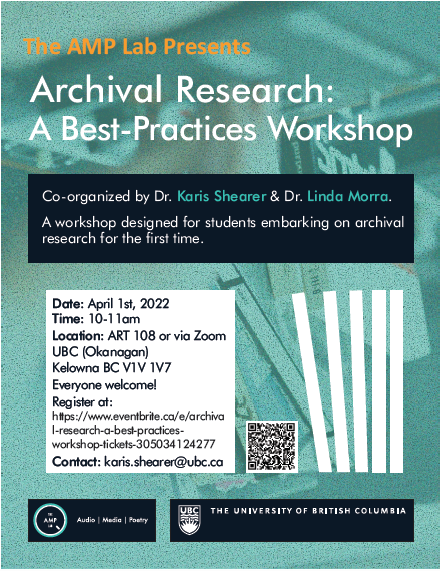 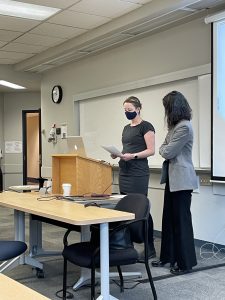 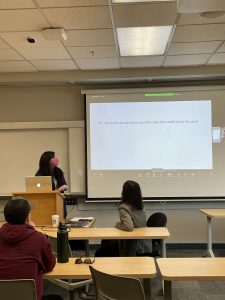 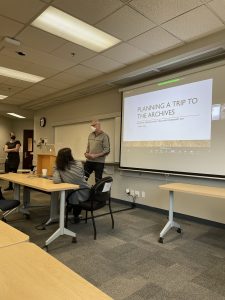 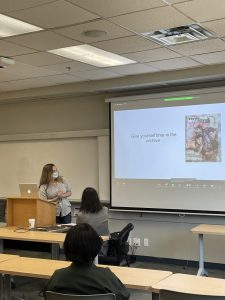 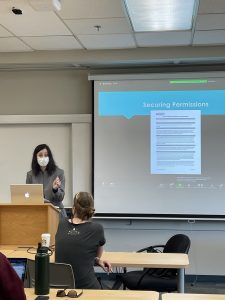 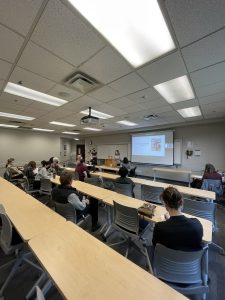 The workshop was delivered both in-person and streamed live as a webinar via Zoom. We’re very grateful to the SpokenWeb RAs who assisted with the event facilitation: Judith Burr, Megan Butchart, Sarah Cipes, Xiaoxuan Huang, and Yasaman Lotfizadeh. The event recording will appear on the AMP Lab’s YouTube channel later this month. 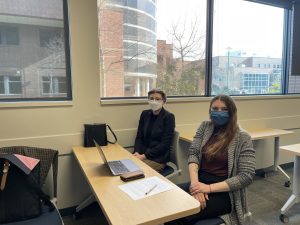 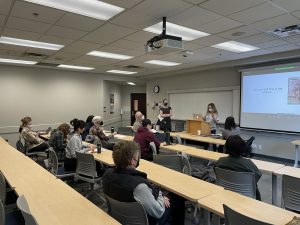 Sarah Cipes graduated with a Master’s degree in Information Science (Archives and Record Management focus) from the University of Toronto in 2021 and holds a BA in English from UBC Okanagan. She is the AMP Lab PRC fellow and a PhD student in the IGS Digital Arts & Humanities theme at the University of British Columbia Okanagan.

Paige Hohmann is the archivist at UBC Okanagan Library, where she manages its special collections and archives. In this role, she is involved in coordinating the BC Regional Digitized History project (bcrdh.ca), which provides digitization support to community archives. Paige is a collaborator in two research projects concerned with archives and recordkeeping: InterPARES Trust AI, and SpokenWeb.

Daniel Keyes is an associate professor in the Faculty of Creative and Critical Studies at UBC Okanagan. He holds a PhD in English from York University. His research focuses on Whiteness, Anglo-Settler Identity, the Okanagan, and Digital Ephemerality. He teaches cultural studies and English.

Linda Morra is a Full Professor of English and this year’s Farley Distinguished Visiting Professor at Simon Fraser University. Her research, which is animated by inquiries into the place of women writers in the public sphere, culminated in a monograph, Unarrested Archives (UTP 2014). This book was followed by Moving Archives, which won the Gabrielle Roy Prize in 2020 and by On the Other Side(s) of 150, which won the Canadian Studies Network Prize in 2021. She also prepared an edition of Jane Rule’s memoir, Taking My Life, shortlisted for the international LAMBDA prize in 2011.

Emily Murphy is an Assistant Professor in the Faculty of Critical and Creative Studies at the University of British Columbia Okanagan. Emily received her PhD in English Language and Literature from Queen’s University, and holds a Masters in English from University of Alberta. Her research includes digital humanities, 20th-century literature, women’s writing, psychiatric history, actor-network theory, and movement in literature and the digital.

Tim Paulson is an assistant professor of environmental and economic history at the University of British Columbia, Okanagan. Paulson’s current research on beef marketing and working rangeland ecosystems in Australia, Canada, Japan, and the United States examines diverse capitalist approaches to nature and their harms. Paulson is a member of the North American support group for the International Year of Rangelands and Pastoralists, which the United Nations has approved for 2026.

Margaret Reeves is an Associate Professor in the Department of English and Cultural Studies, and an Associate Member of the Gender and Women’s Studies program. She has conducted research on early modern manuscripts, on early printed books, and on historical papers in a variety of archives, including the Public Record Office in Northhamptonshire, the Fitzwilliam Museum in Cambridge, the Bodleian at Oxford, and the British Library in London, England, as well as several libraries in Toronto: the Osborne Collection of Early Children’s Books, Emmanuel College Library, and the Fisher Rare Book Library. Margaret has also worked in a research library: she is the former Curator of the Centre for Reformation and Renaissance Studies, a research centre at the University of Toronto housing a non-circulating library of about 20,000 books and about 2,000 rare books (i.e. books published before 1800). This past week she has been conducting research in an online archive called Early English Books Online.

Karis Shearer is Principal’s Research Chair in Digital Arts and Humanities and director of the AMP Lab at UBC Okanagan. Her research interests include Canadian and American poetry, literary audio, literary archives, media studies, feminist theory, sound studies, and oral history. She is co-editor Wanting Everything: The Collected Works of Gladys Hindmarch with Deanna Fong in 2020.

Jessica Stites Mor received her PhD in history at Yale University in 2008. She currently serves as the editor-in-chief of the Canadian Journal of Latin American and Caribbean Studies and is author of Transition Cinema: Political Filmmaking and the Argentine Left since 1968 and South-South Solidarity and the Latin American Left.